As a general rule, ownership brings responsibility. If you own a car that pollutes, or a dog that injures another creature, you can be fined or go to jail. Even owning a t-shirt or a pair of socks brings responsibility — if you don’t dispose of them properly, there are fines for littering. 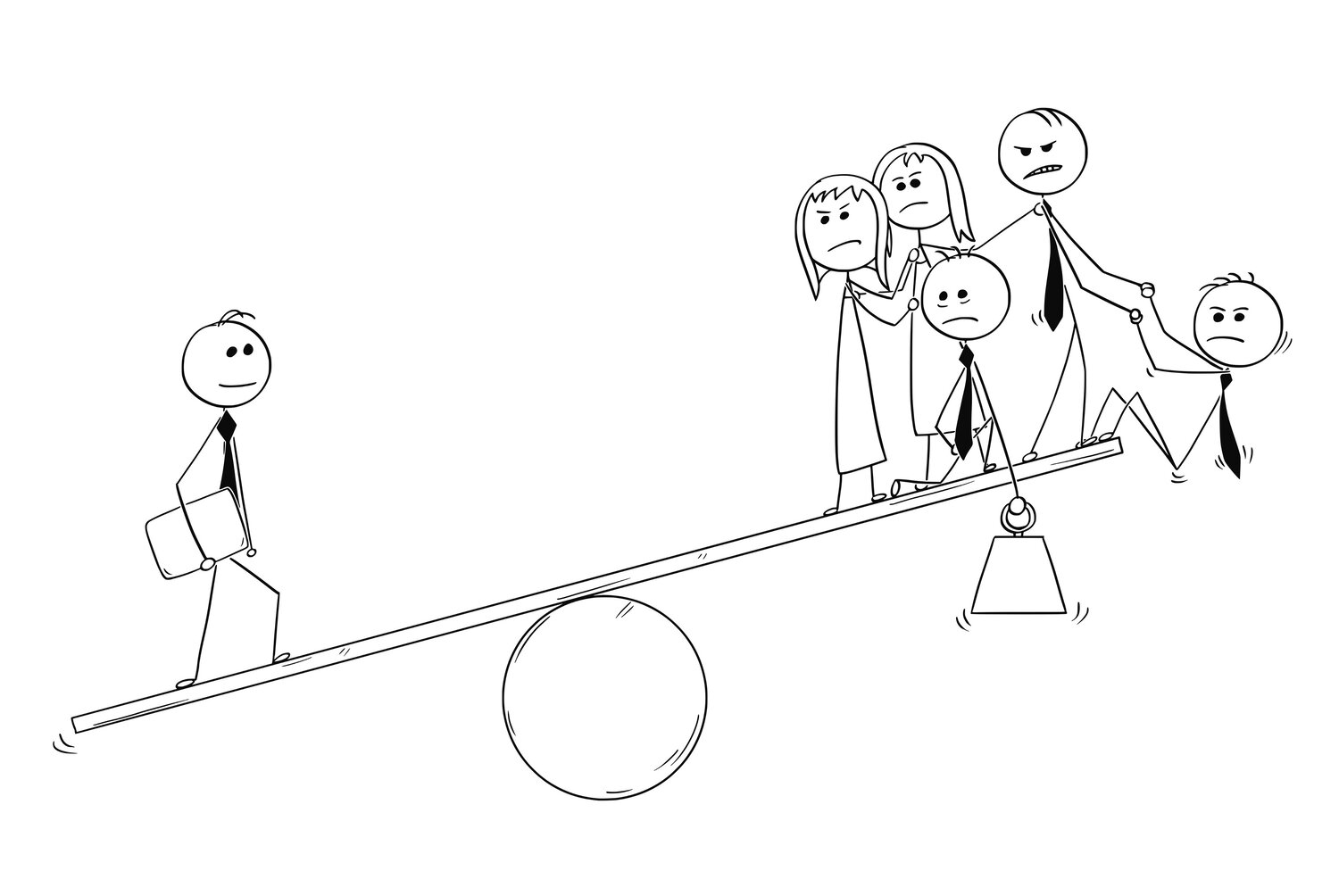 So it’s something of an anomaly that the owners of companies have no legal responsibility for their actions. If you own a share in a company that breaks the law, pollutes the environment or even kills someone, you can’t be touched. Is this not strange?

This is no minor matter of academic concern. Large companies are amongst the most powerful institutions on the planet, and how they are governed affects us all. Yet the question of share ownership gets very little public attention. When, say, a bank manipulates interest rates, or a car company lies about its emissions, the focus of blame falls upon the senior executives. There is no mention of the ultimate owners, the shareholders, and their role in the crime.

Of course, owning a share is not the same as owning a physical thing. It doesn’t give you actual control — just certain rights that you can exercise from a distance. And if you own a small % of shares in a company, your influence will be negligible. Investing, say, £1m in Tesco plc or Microsoft will give you little in the way of voting power. Besides, shareholders don’t run companies, boards do. There is a clear separation of power in law.

Shareholder power vs other stakeholders

All this tends to disguise the fact that shareholders wield enormous power collectively. They appoint and dismiss the board and can approve the sale of the company, over the heads of the board. They are the ultimate holders of power in the corporate system. And yet their power is not balanced by any responsibility, which causes an imbalance in the system.

The directors, naturally interested in keeping their jobs, have to be seen to be putting investors’ interests first, which means prioritising growth and profit. This bias in favour of investors does no-one any good. Successful businesses need to balance interests, not prioritise one over the other. Over time, this imbalance starts to manifest in perverse behaviour. Pharmaceutical companies,

established to heal the sick, focus on selling as many drugs as possible, thus making people ill. Food retailers, who made their reputation by providing good food at a fair price, use their arts of persuasion to increase their customers’ consumption of poor quality food. Even supposedly enlightened leaders such as Paul Polman, former CEO of Unilever, feel obliged to promise

It’s easy to blame individuals for these problems but this tends to distract from the main point,

that there is a system failure. “A bad system will beat a good person every time.” said system thinker W. Edwards Deming. That doesn’t mean we absolve individuals from all responsibility but rather that, if we want real change, we need to look for solutions at the system level.

I have no doubt that system change is coming, involving a radical rethinking of the way we own and run companies. There are many signs of this. But it is impossible to predict with confidence when the system will shift and what the new system will look like. When a system changes, there is disruption in multiple dimensions. Existing relationships are re-configured, power shifts and few in the system remain untouched. It can be scary to even think about, particularly if you are comfortable where you are. Perhaps that’s why so much energy goes into propping up the old system.

What I am witnessing currently is the emergence of a new breed of purpose-led business people who are questioning the old ways of doing things and are willing to experiment with their legal form. There is a resurgence of the cooperative form — a mutual that is democratically controlled by its members. Other businesses are becoming B Corps, including a purpose beyond profit in their constitution that the board of directors is obliged to promote.

These models suit some businesses, but not all. If you become a cooperative, you will find it hard to raise capital, because of the way the ownership is structured. If you are a B Corp, you may be able to raise capital but there is nothing to prevent your investors selling the company and changing the constitution back to a more investor-friendly one.

This causes some entrepreneurs to look for more radical approaches. Entrepreneurs such as Emma, Rebecca and Sophia, the three founders of Library of Things, a business based in London. They run lending libraries where members can borrow a diverse range of goods including power tools, equipment for parties and cooking devices such as waffle makers. They originally set up as a not-for-profit, but soon realised the limitations of this approach. In the words of Rebecca (see

“We realised it was no longer viable to both keep our non-profit company and grow Library of Things, because:

Grants and philanthropy were keeping us in a state of dependency;

Non-profit structures don’t generally allow for the team who created the company to own a stake, which we felt was important; and

A distant board of trustees or non-executive directors, which is insisted on by many donors, tends to make less satisfactory decisions than the people working in the organisation.

Yet we decided against a standard for-profit company, because we saw the following failings:

Personal profit motive and shareholder influence too often lead to ‘mission-drift’ at best, and at worst, activity and decision-making that is destructive for society and the environment.

Obsession with an ‘exit’ — there is a madness that many start-ups fall prey to, where an exit (such as a trade sale) seems to become the purpose of the business.

The technical solution I offered was a ”guardian” share structure. This innovation has been around since the 1970s, when many governments wanted to protect certain constitutional elements of privatised businesses. In particular the UK government used guardian (or “golden”) shares when it embarked on mass privatisation in the 1980s. In time, most guardian shares in large corporations were scrapped. They came to be seen as an impediment to free trade and thus heretical to neo-liberal politicians. However there’s a renewed interest in using this structure —

and even a foundation in Germany established for the purpose of holding such shares in private companies.

It works as follows. Firstly, the articles of association of the company are amended to express a purpose beyond profit (just as B Corps, and many social enterprises, do). This could be quite

Riversimple) or very general e.g. “to have a material positive impact on society and the

environment as a whole” (Cook, the frozen food retailer). Stating a purpose like this is a powerful thing to do. It makes it clear to all concerned that the company exists for a reason beyond just the narrow interests of the board or the shareholders.

Then, alongside the ordinary shares issued to investors, one special share (the guardian share) is issued to an independent third-party, typically a charity or other not-for-profit, one that can be relied upon to uphold the mission. The main right attached to this share is the right to block changes to the company’s purpose. Often there are other, complementary rights such as rights to information, the right to attend board meetings, and the right to block an exit that threatens the pursuit of the purpose. These powers are not intended to put the guardian shareholder in a dominant or interfering role, but rather to provide protection from over-bearing investors — it provides a framework within which the board and management can be free to pursue the purpose while balancing the interests of all stakeholders, including investors. It establishes a healthy balance between purpose and profit, and breaks away from the traditional “board vs shareholders” dialectic of corporate governance.

Having established this structure, the first real test came when the founders of Library of Things went out to raise money. How would potential investors react to this structure?

The reaction was, not surprisingly, mixed. Some investors reacted with incomprehension and some with scepticism. Many however, recognised the wisdom of the approach, which they saw as being in line with the company’s values. As I write, the company has just closed the first part of its funding round (nearly £250k — mainly raised from individual “angel” investors) and the founders are optimistic about raising the remainder.

There will be more tests to come, of course. Notably, what happens in a year or two if they want to raise larger sums from professional investors?

In fact another client of mine, Dataswift, recently cleared this milestone, raising £1.6 m from various investment funds. Dataswift operates in the realm of personal data, and hopes to attract thousands or even millions of users, who will be entrusting the company to hold very private information. Integrity and trust are thus paramount. The founders embraced the guardian share structure as offering an external validation of its integrity, a powerful message to its users and customers. The investors recognised the value of this unusual structure — they felt it offered the company a competitive advantage in a challenging market.

In an age where the reputation of a company is often its major asset, I predict that such mechanisms will become more and more common. It would be a natural share structure for a B Corp or any other purpose-driven organisation. But why stop there? What if an oil company had a guardian share held by World Wildlife Fund? What if a pharmaceutical company had a guardian share held by a health trust?

You may think I am getting carried away. Shareholder ownership seems so well-established in our society — will investors really be willing to surrender their sovereignty? Yet we are collectively confronted with large and complex challenges such as inequality, social fragmentation and an environmental crisis. If we could free up large corporations from the unrelenting pressure to pursue growth at any cost, they could play a significant role in addressing these challenges.

Business can be a great force for good and will, I feel sure, play a major role in helping humanity meet the challenges of the 21st century. But not business as we know it, not business set up to maximise short-term profit in service to owners that have no responsibility. Innovations such as the guardian share show how we might rebalance the corporate system and put business on the path to wisdom and selfless service.

First published in Medium on 17 October 2019