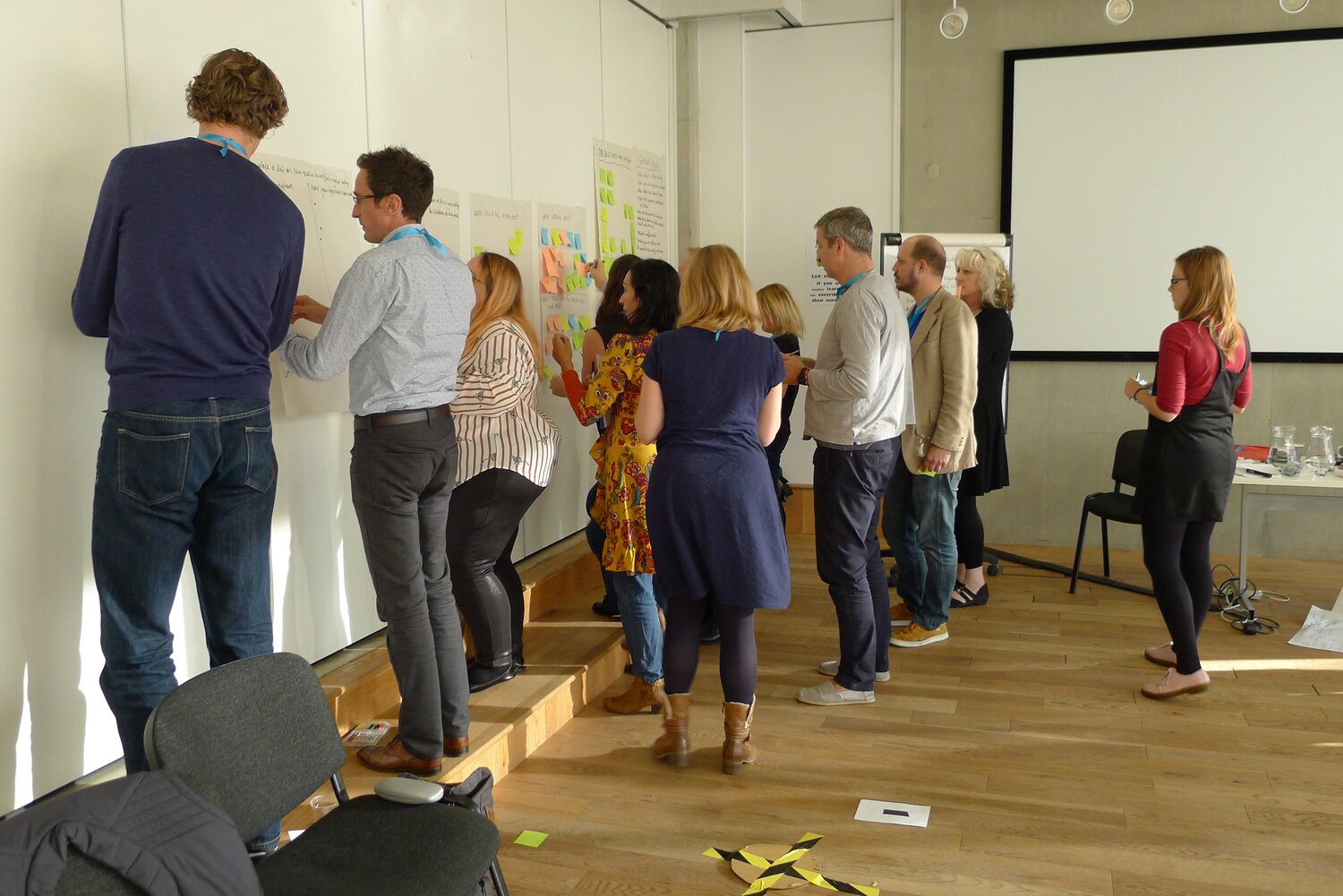 These were some of the words and phrases that came from a group last week, taking part in a workshop run by the Human Organising Co on “next stage organisations”. We were looking at what causes pain in today’s organisations. One woman talked of the tyranny of project plans that leave no room for anyone to have an off day. Another talked with anguish about the education system, and how it seems so ill designed for our children.

There is no doubt that our organisations are struggling to cope with the pressures and challenges of the 21st century, and it is causing a lot of pain. According to a Gallup poll, over 16% of the

workforce in the US are “”actively disengaged” at work, and barely one third say they are

”actively engaged”. What a waste of human potential!

So what can we do about it? In the workshop, we talked about opportunities to reinvent our organisations. Participants came up with a torrent of ideas for how to do this, including ideas for individual development (such as self-awareness), loosening up organisations to allow ideas to “bubble up”, adopting structures that are less constraining and more “liberating”, and taking inspiration from nature.

Such ideas are not new. You can find them in the writings of Margaret Wheatley, Ricardo Semler, Peter Senge and Peter Block, among others, in the 1990s. And you can trace this thinking much further back than that — for example, to Lao Tse 2500 years ago:

“The best leaders are those the people hardly know exist”

But take up of such thinking in our organisations has been extremely slow. What’s holding us back? If you’d asked me that question just five years ago I would have pointed to three things in particular:

lack of awareness of credible alternatives to current norms;

lack of tried and tested tools to enable easy adoption; and

a mindset that takes it for granted that some are born to manage and some to follow orders.

In the last five years the landscape has changed dramatically. A number of books, notably Frederic Laloux’s book “Reinvention Organizations”, have inspired thousands of people around the world with the vision of “teal” companies that need no managers and that embrace wholeness and diversity. Meanwhile brave pioneers around the world have been experimenting with different, less bureaucratic ways of organising and have shared stories, tools and practices.

All that’s holding us back now is our collective mindset — our attachment to old ways of doing things. However, this too is changing. I was with a group of (mainly) young people two weeks ago in Barcelona, exploring the idea of creating a “Human Network Festival.

www.humannetworksfestival.net/. Most of those attending that gathering were already living in this new world of highly distributed organisations. They have no attachment to the old ways of doing things — far from it. This gave me great hope that we are getting much closer to times when truly “human” organisations (wise, compassionate and liberating) are the normal.

Of course, if that time is to come, we will have to deal with the voices of doubt and fear, both within ourselves and others. In our workshop we played out a conversation between different actors in an imaginary business — the enthusiastic founder, sceptical finance director, the reluctant staff representative and so on. Strong arguments were presented from each side, and strong passions were expressed — enthusiasm, frustration, fear, uncertainty. This reflects the reality that adopting new ways of working is not easy. It requires a big shift in our thinking and our behaviour patterns. There are many, many difficult and highly emotive conversations to be had over the coming years in institutions and organisations across the globe as we shift our mindset to one that is more suited to the 21st Century with all its challenges.

Towards the end of the day, as a taste of this new world, we ran an Open Space session. Open Space, developed by Harrison Owen, is a really powerful and liberating practice for enabling a group to work together. The group itself sets the agenda, in real time. The topics that emerged on this occasion were typically diverse, including:

why teal — what’s in it for all involved?

how is mental health in the workplace affected by new ways of working? and

The participants chose which topic they wanted to get involved in discussing — as organisers, we could just sit back and watch it flow.

We closed the workshop with one word from each participant, shared with the group. Reflecting afterwards, though, it seems to me that you never really close such conversations. Once opened up they remain alive, taking new forms and involving new people in homes and workplaces across the country and further afield. The work of reinventing our organisations is the “great work” for this generation and it will remain a live conversation for a long time to come.